An arrest and a rescue

“Bin” and “Thay” are teen girls, not quite 15 years old; and yet already have been through a hell most of us will never know.

Each was taken separately. Although they are both from Ha Giang province in northern Vietnam, they didn’t know each other before they met in the most horrible of circumstances: a brothel in China.

Their trafficker was a woman (pictured), a member of a gang that routinely traffics underage Vietnamese girls to China and sells them for sex. The trafficker used the same tricks to get both Bin and Thay across the border. 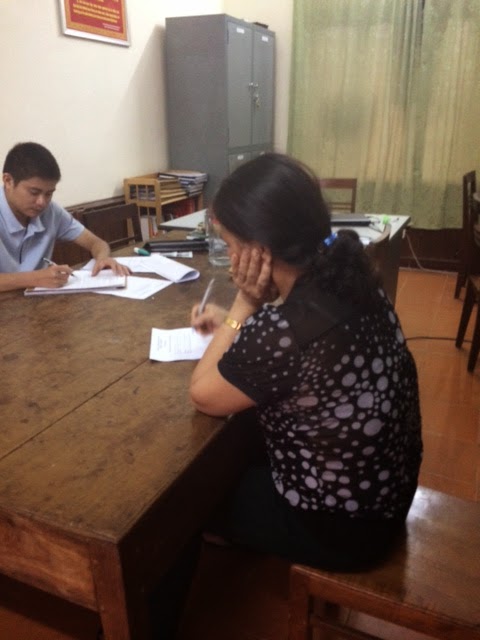 The trafficker writes out her confession in a police station.

The girls are from outlying districts of the province, and so were heading in to the main township to prepare for the new school year. The trafficker met them at the bus station, showered them with kindness and took them for a meal. Finally, she called on a “relative” – another trafficker – to go and buy them some new clothes… and instead of heading toward town, they crossed into China and were handed over to more gang members.

What happened to them next is deeply troubling.

Bin’s “virginity” was sold several times; she was stitched back up and re-sold after each rape. She was then sold to the brothel. Altogether, Bin was in the hands of the traffickers for 12 days.

Thay was taken first to a distant district in China where she was handed over to a brothel; but Chinese police came close to finding her and so she was moved back closer to Vietnam, where she ended up in the same place as Bin. Thay lived through 25 days of this hell.

Both girls were rescued by Chinese police on Sunday night, acting on information sent by the Vietnamese police. They are now back at home safely with their families. 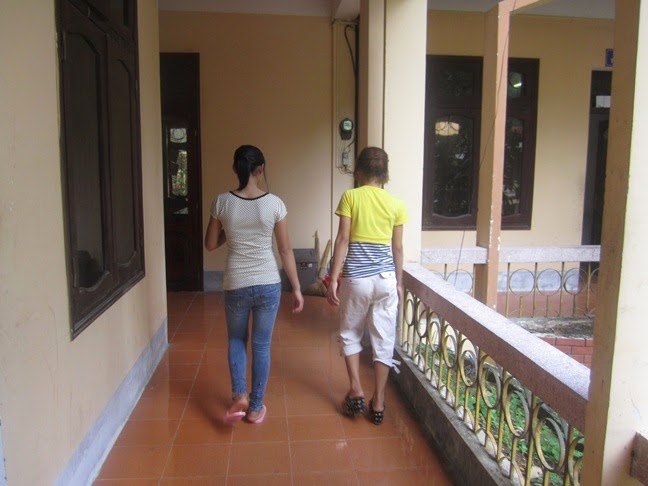 “Bin” and “Thay” back in Vietnam, on their way to make statements to police.

This trafficking ring is one that Blue Dragon has encountered before. Earlier this year, we were involved in the repatriation of 2 teen girls who jumped out of a window to escape a brothel. While the girls made it home OK, their traffickers have been evading police – until now.

Over the weekend, we had a call from the Ha Giang police informing us that the ring was back and was about to traffic some new victims. Our team headed straight up to the remote province to join in the search for the traffickers; it was a long trip but we found the woman in the early hours of Sunday morning. Once in the police station, she confessed everything and gave up details of where Bin and Thay were, enabling the Chinese police to bring them home and arrest the brothel owners.

Since then, 2 other ring members were caught and 2 more are on the run. They don’t have much time left: they’ll be caught for sure.

Later this year we will represent Thay and Bin in court, when their traffickers finally face trial. Seeing justice done is an important part of the healing process, and both Bin and Thay will need an awful lot of healing in the weeks and months ahead.

← The ghost and the gang The danger in staying safe →
×
View by:
We use cookies to ensure you enjoy the best browsing experience on our website.
By continuing to browse our site you are agreeing to our use of cookies. Please read our Cookie Policy.