We met Minh in February, alone and cold on a park bench at night.

He was 15 years old, but tiny for his age; he could easily pass for 12 or 13. He’d been sleeping rough on the streets of Hanoi for just a couple of nights, and was relieved when he came across Blue Dragon’s Outreach workers. The streets of Hanoi are dangerous places for homeless children.

Minh was a likable boy, quiet and unassuming but with a dazzling smile. We were shocked when he disappeared just a few days later, slipping away unnoticed from the shelter… with a laptop he decided to steal from us.

We weren’t thrilled about the laptop, of course, but our deeper concern was for Minh. We feared what would become of him out on the streets. Hanoi is currently in the grip of a plague of pedophiles preying on homeless boys; the chances of him staying out of trouble were slim.

But last week, we met Minh once again. He was very embarrassed to see us, having both left and robbed us, and he was stunned that we were concerned for his welfare. I guess he thought he was in for a beating, or that we would call the police. In fact, we just wanted to make sure he was safe.

Minh came back to the Blue Dragon shelter, half in disbelief that we really weren’t planning to take him to a police station, and over the coming days he told us what had happened. He explained that he feared we would force him to return to his family (which we don’t do – we don’t do anything without the kids’ consent), so he ran away and took the laptop as something he could sell.

In the months that he was out on the streets, he was approached by pimps and pedophiles repeatedly, but he didn’t give in. He was able to beg for money and he met some kind people who would give him food. Still, life was incredibly difficult and he was always hungry.

Minh had left home in the countryside because of some problems in his family, and he was afraid to go back. But after some days with Blue Dragon, seeing that we were not going to punish him for the missing computer and that we really did have his welfare as our only concern, he agreed to go back to his family home on two conditions.

First, he wanted one of the Blue Dragon staff to go with him. And second, if things didn’t work out, he wanted to return to Hanoi with us.

And so on Tuesday, one of the Blue Dragon Social Workers, Huong, travelled over 200km from Hanoi, up into the mountains, to reunite Minh with his family. There was absolutely nothing to worry about: they were all so worried for the missing child that whatever wrongs had been done, they were just glad to have their son back. Many tears were shed, and finally Minh turned to Huong to tell her he would stay at home. He didn’t need to go back to Hanoi again. 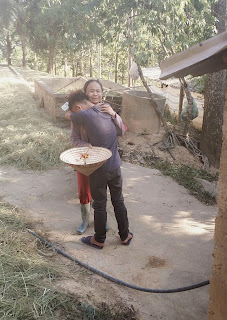 This was the happy ending we had hoped for, but didn’t dare expect.

Minh is home now, and has sent us messages over Facebook telling us how happy he is. I can’t help but think, though, that he should also acknowledge how brave he has been.

Returning to Blue Dragon when he was unsure what we might do… and then going back to face his family after months away… what courage this must have taken. Minh told me that he was scared, but that he needed and wanted to do this. He knew that going home was the right thing to do, and so even in the face of his fears he decided that he must do it.

Yesterday, Blue Dragon launched its annual appeal for donations. Every year at this time we ask ourselves: What is it that our kids really need? What is the pressing need for the coming 12 months, that we will have to go out and ask for?

This year, the answer came back to us in a single word: Courage. Our kids need courage. Whether it’s a boy running away from home who has to face his greatest fears, or a girl trafficked into China who needs the pluck to call for help and attempt an escape… the Blue Dragon kids need courage.

Minh’s story well illustrates the fears and dangers faced by kids here in Vietnam. We’ve updated the Blue Dragon website with stories from a few of the kids who wanted to share their own thoughts on what courage is – go and have a look at the site, it may well be the most inspiring 5 minutes of your day.

I don’t often use my blog to ask for donations. But right now, I’d be remiss not to. I am seeing kids every day who face terrible situations that very few of us have to ever confront; they need, and deserve, our help.

They need courage to conquer their situations; and they will have courage if the world can stand beside them. We all have a part to play.