Over the weekend, I travelled with Blue Dragon staff to Lang Son, a northern province of Vietnam bordering China.

We were on a journey to reunite a teenage boy, “Quang”, with his family. Quang had run away from home and the Blue Dragon Outreach Team had found him on the streets of Hanoi. Fortunately we met him within a day of his arrival in the city; street kids here are routinely approached by pedophiles and their pimps, sometimes within hours of getting off the bus. Our strategy is to keep a presence on the streets as far and wide as possible in order to find kids as soon as they arrive.

Quang had come to Hanoi because of problems at home. As a baby, he was given to another family to raise, and deep down he has always felt a resentment at being handed over like that. I guess that nobody has ever explained to him why it happened.

Although he was raised by a family who cares for him, he has never felt that he belongs. As teenagers do, he has been acting out and subsequently has been labelled as a troublemaker. In reality, all he wants is to be loved.

As he ran away from home, Quang took a motorbike owned by his adoptive family. He planned to ride it all the way to Hanoi, but was stopped by police in the very first town he reached. The police confiscated the bike, and Quang continued by bus to Hanoi, where he met Blue Dragon.

After a few days at our shelter, Quang agreed to go home, although he was pretty nervous. He lives in a very remote village, accessible by a dirt track which cannot be used when it rains. They have electricity, but the connection is feeble and blackouts are common. The level of education is extremely low: Quang himself has only finished Grade 4. As an ethnic minority village of the Dao tribe, many people do not even speak Vietnamese. 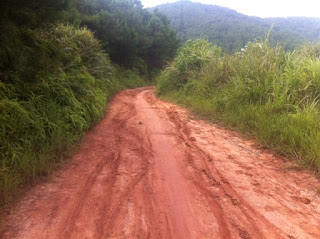 The road to Quang’s village.

Along for the journey were 3 Blue Dragon teens who we took for a break from the city. All are high needs kids who have lived on the streets and are now in shelters but need a lot of care.

We had a 6 hour drive to get to Quang’s home, but stopped for lunch on the way at the home of a young man named Minh. Minh was one of the original Blue Dragon kids back in late 2002; he was a shoe-shine boy on the streets of Hanoi, supporting his family financially, and he moved into our very first shelter, The Big Room. Now Minh is married with 2 beautiful children of his own, and runs a bakery in Lang Son province. His business is booming, and it was wonderful to see the new life he has created for himself. 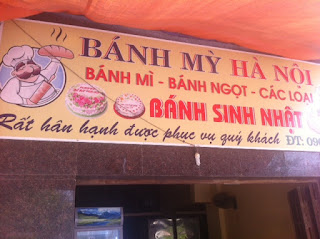 Finally we made it to Quang’s village, and the difficult journey was well worth it. Nestled in the mountains, Quang’s home was extremely poor but with an astounding natural beauty. His adoptive family was glad to see him home and willing to work through the problems that they face. Blue Dragon offered to help recover the motorbike, which was still in the police station, and we’ll stay in touch with Quang in coming months to make sure he’s OK. 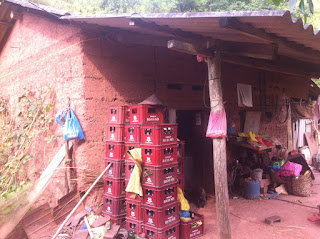 Quang’s home, made of mud brick. His family runs the town’s only store. 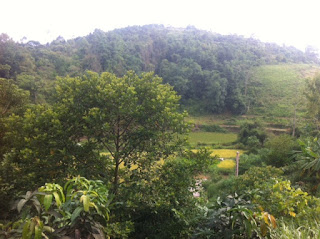 The view from Quang’s front door.

By the time we left, everything was not resolved but the family was talking and committed to helping each other. And so we began the long journey back to Hanoi, leaving Quang with his family.

Along the road home, one of the Blue Dragon teens spoke up. He said that seeing a village like this, and a home so poor, reminded him that there are people less fortunate than himself. This is a powerful lesson for a boy who has grown up in an abusive and unloving family, and who at age 15 is already covered in scars from knife fights.

Blue Dragon Children’s Foundation has so far reunited 256 runaway children with their families. Not all reunions have been so complex and remote as Quang’s, but many have – indeed, many have been much harder than this one.

Getting a child safely home to their family, and out of the dangerous life on Hanoi’s streets, is always worthwhile, no matter how difficult the journey may be.