The ghost and the gang

In the past month, Blue Dragon’s Legal Advocacy team has represented two children in court. Although they were both cases of sexual abuse, they were completely separate matters.

The first case went to court in July. A 44 year old man, Lan, was sentenced to 4 years in prison for abusing underage boys. He was caught back in March, when my team had information about Lan being in a hotel with a 13 year old boy, “Nam.” We called the police, who raided the hotel and caught the man and his pimp, who will go to court in a separate trial soon.

Blue Dragon had known of Lan for over a year; he was a con artist, posing as a fortune teller while traveling around Vietnam with at least 3 boys by his side at all times. Although he kept a steady group of boys, he also picked up new boys along the way – homeless kids or children living in extreme poverty – to abuse them for a night and then throw them out.

Lan moved from hotel to hotel continuously, using fake ID cards to avoid capture, and the March raid on his hotel room was the first time we had ever laid eyes on him. Despite knowing 7 of his victims, Lan had made himself almost impossible to find. Among our staff, we nicknamed him “The Ghost,” because every time we came close to locating him, he seemed to vanish. But not this time.

The second case went to court today. The accused were a gang of youths who had entrapped and raped a 13 year old girl, “Hien,” after finding her homeless and penniless at one of Hanoi’s lakes.

Blue Dragon met Hien on the street the day after she had been attacked and took her straight to the police. The gang was known to us and they were easy to identify and catch. The shock, though, was that 2 of the offenders were children themselves; and one of them, arguably the ringleader, was a 13 year old girl. These 2 kids are too young to even be charged, and yet both are notorious in the area for theft, dealing drugs, and a range of petty crimes.

The convictions for the gang members varied considerably. While the 2 children will be sent to reform school for 2 years (as they are now both aged over 14), one of the young men was sentenced to 18 years in prison. That’s how serious the crime was. 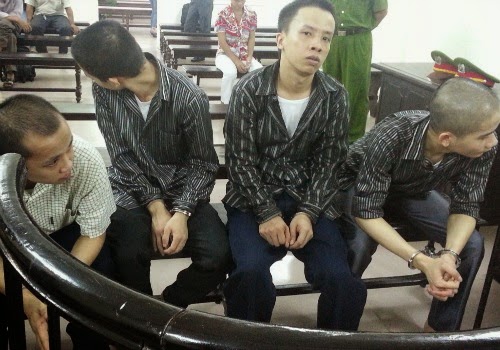 Protecting, sheltering, and defending Vietnam’s children is a part of Blue Dragon’s work that has grown over time. Not only do we deal with many more cases now than just a few years ago, but the cases are far more serious in nature. Often they are very dark.

Nam and Hien have both been through incredibly traumatic experiences, and the court cases were stressful times for them both. But for what it’s worth, they have had justice: their abusers have been detained and sentenced.

As I wrote last week, there’s no doubt that Vietnamese society is under pressure and that children are feeling it the most. We have no choice but to hope that things can, and will, get better.

← Something has to change An arrest and a rescue →
×
View by:
We use cookies to ensure you enjoy the best browsing experience on our website.
By continuing to browse our site you are agreeing to our use of cookies. Please read our Cookie Policy.