Every week, Blue Dragon’s Street Outreach team meets new kids who are in complicated and dangerous situations on the streets of Hanoi. Many are the target of traffickers, which is a relatively new phenomenon for the city; boys as well as girls face serious exploitation unless they get help quickly.

His family loved him very much, but several complexities lead him to leaving home and taking to the streets, where he immediately became a target for traffickers. Although Vu met Blue Dragon’s Outreach workers, he was in such a state of despair that he didn’t know who to trust. And then he vanished.

About a year later, he resurfaced. He was taller and seemed physically healthy, but his face belied the truth. Vu had been through a year of hell.

Even now, Vu says almost nothing about what happened during that year. But we know enough to understand the deep pain he lives with. One comfort is that, thanks to Blue Dragon’s work with the Vietnamese police, 2 of the main people responsible for his ‘year of hell’ now live in prison cells.

Most of the trafficked boys who we work with act out their pain by getting in to all sorts of trouble. Not a week goes by that one of them doesn’t get caught by the police for some minor violation… or come to tell us that their girlfriend is pregnant… or drops out of school for a few days. But not Vu. He quietly and smilingly goes about making friends with everyone at Blue Dragon. He tries to blend in, to be like everyone else, but when he thinks nobody is looking the pain returns to his eyes and the sorrow is etched into his face.

However, in the past week, Vu has achieved two major milestones: he has returned to school, and returned for a visit to his family home.

Going back to school was a way of declaring that he has healed. It took him all this time, but finally Vu told us that he was ready to get back to his studies. He didn’t want to go to a ‘special’ school, either; he wanted to go back to a mainstream secondary school. With the school year nearly over, his timing wasn’t great, but the school generously agreed for him to sit in on classes as a way of preparing for the new school year in September.

And then came Vu’s next pronouncement: he wanted to visit his family.

Since leaving several years ago, Vu has not stepped foot back in his home. He’s gotten progressively closer, though. Some months ago he agreed for Blue Dragon staff to accompany him home… but at the last minute couldn’t bring himself to do it. So after a 200km drive, he hid in the car while the staff went and spoke with his father and grandfather.

Then at Lunar New Year he almost went home again… This time, he went to the nearest village to his home, called his father to come and have tea, and then returned to Hanoi. That was a 12 hour round-trip for a 30 minute drink.

But today Vu did it. He returned home, dressed in his school uniform so that everyone could see he’s a ‘normal’ kid.

I was both fortunate and proud that Vu asked me to go along with him on this trip. These days I rarely get to go on such journeys myself: rightly so, it’s my Vietnamese colleagues who accompany kids on their family business. But when Vu invited me to join him, I immediately agreed. I knew how important this journey was.

It was a long trip to get there, and Vu was nervous along the way; but once home, those worries melted away. Today was also the death anniversary of Vu’s grandmother, so many relatives and neighbours had gathered at his family home. Having Vu return – with a foreigner in tow! – was a huge event for everybody.

A meal was prepared, and lots of typical ‘family gathering’ stuff going on, but there were also many touching moments, discretely held. Perhaps the most beautiful was when Vu’s grandfather, 87 years old and hard of hearing, sat by Vu and tearfully encouraged him to work hard at school, always do his best, and remember his family when he (the grandfather) is gone.

Vu was shy about me taking photos at the house, but I took this one of a home-made clothes hanger in the yard. It struck me because I’d never seen one before. With so little money and resources, this family simply could not afford any luxuries, such as hangers for their clothes. So they made this one, out of a stick and some string. 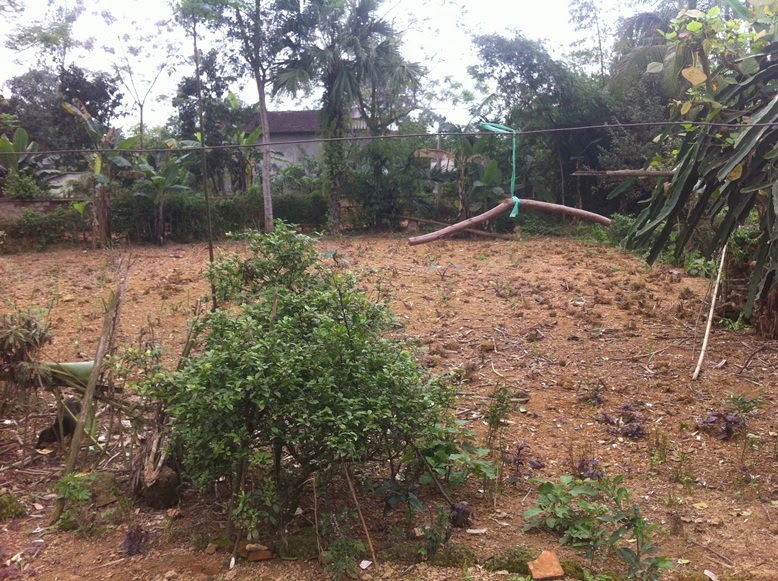 Of itself, this hanger isn’t particularly remarkable. But standing in Vu’s home, seeing how little they have and how much they have all struggled, the hanger reminded me of just how unimportant ‘things’ are.

I have always seen hangers as basic household items. Yet for some families, they are a luxury; an unnecessary expense in the context of so many pressing needs.

For Vu’s family, the list of needs is so long: hangers are surely last on that list. First and foremost is their need for family healing. Vu has been through such terrible times, but is now finding stability and thinking of the future. That’s so much more important than having ‘things.’

Life is starting to look good for Vu. He has a home with Blue Dragon; he’s successfully returned to school; and he has re-established contact with his family. The reunion went so well that there’s no doubt he can be confident to go back again any time.

Many struggles lay ahead, but I am optimistic of Vu’s future. Maybe he doesn’t have many ‘things’ to call his own, but as each day passes he has greater inner strength, and now he has started rebuilding a relationship with his family.

What could be more important?

← Hope and healing The end is not nigh, but that's OK →
×
View by:
We use cookies to ensure you enjoy the best browsing experience on our website.
By continuing to browse our site you are agreeing to our use of cookies. Please read our Cookie Policy.