Usually when we talk about Vietnamese kids being trafficked to China, we’re talking about girls and young women who have been taken by deception and sold to brothels or into forced marriages.

But today we dealt with a totally new situation that we have never seen before: a Vietnamese boy who appears to have been trafficked into China for sex.

Some details are still unclear, but what we know is this:

Sung is a bright boy studying in Grade 10; he can speak a little English and gets good results at school. But he had no idea that he was being taken to China, and once he got there he was shocked to realise how far he was from home.

He and another boy were taken to work in the city, while the older males were told that they would go to work in a forest.

Sung and his friend were – apparently – taken to a male massage parlour. I say ‘apparently’ because Sung is so innocent to the world that he doesn’t even know the Vietnamese word for ‘massage’. He hasn’t yet told us the full story, but he says that what he saw there terrified him, and within a day he had found a way to escape.

Not knowing where he was, Sung walked for 2 days through China. With no money or food, he was increasingly fearful and desperate. Nobody could understand him, so he found a notepad and pen and wrote out his message in Vietnamese and English: 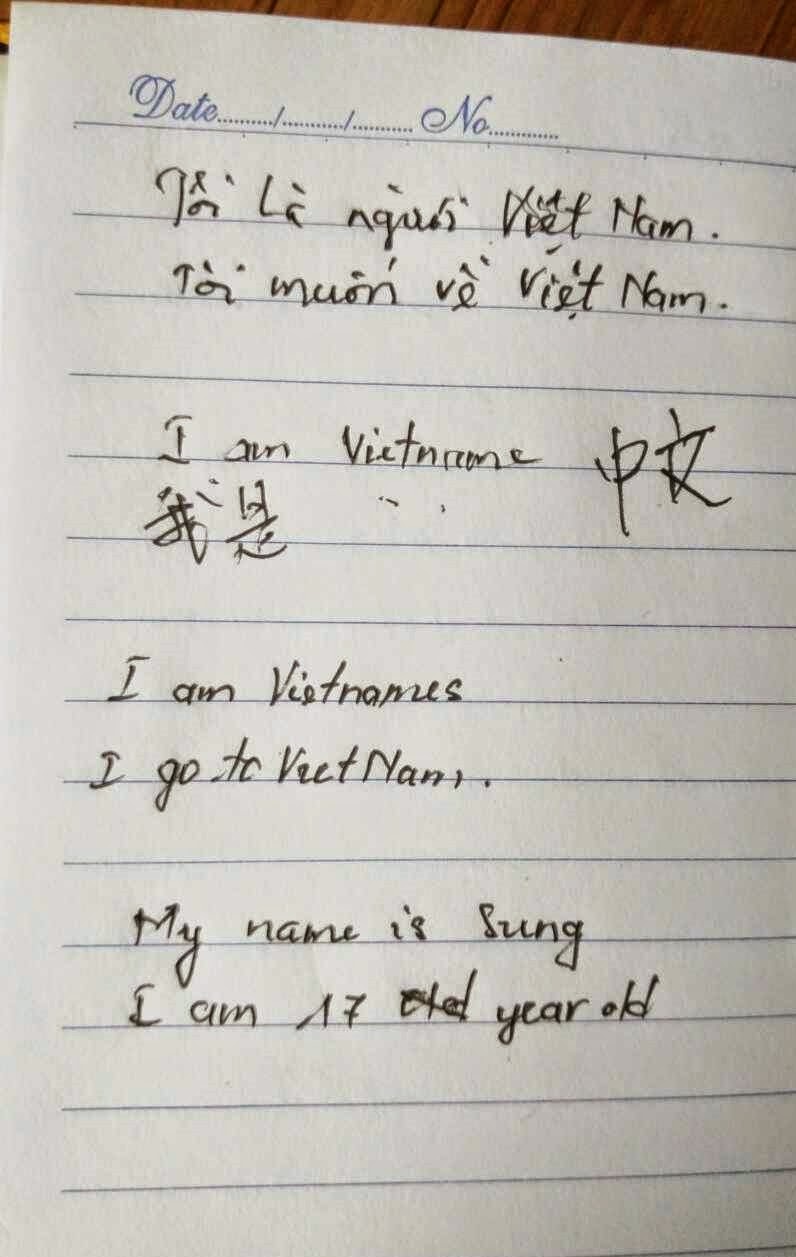 Sung then approached a friendly-looking Chinese woman on the street and handed her the note. She took him to the police, who called their superiors, who in turn called Blue Dragon Children’s Foundation in Vietnam.

Today we travelled in to China to meet Sung and bring him home. The team has just crossed back in to Vietnam, and we hope to have Sung back with his family by Saturday night.

Sung is furiously hungry, and thrilled to be safe. He needs some time to think about what he has been through, and we are confident he will tell us in his own time, but it does seem that he is physically unharmed.

While we are not certain that Sung was being trafficked for sex, there is no other likely explanation for what has happened. This is a disturbing development, if true, and will add another layer of complexity to the fight against human trafficking. It also means that we need to find his friends as soon as possible; for that we will work with the Chinese police.

Sung has been through a terrible ordeal, and may take some time to recover from this experience.
The one saving grace is knowing how far, far worse this could have turned out for this boy.

* While Sung says he is 17, he is still only 16. Vietnamese people often calculate their age with an extra year.