He had run away from an unhappy home in the countryside. Both of his parents had died and he was being raised by uncles who resented him. Everything Hieu did seemed to turn out bad. Nobody believed in him, so he gave them what they expected. He stole from them, dropped out of school, and eventually left to live on the streets of Hanoi. 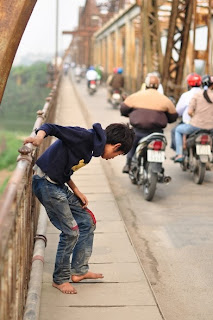 Once in the big city, Hieu drifted. He met Blue Dragon’s Outreach Workers one night, and spent some time in our emergency accommodation before we helped him contact his family again. But it didn’t work out. Shortly after, Hieu was arrested and sent to reform school for a series of petty thefts.

Despite that, we believed in Hieu. He was a good kid. His theft was not from people, but of unused items in a public park. Even though he was doing the wrong thing, he was careful that he didn’t hurt anybody.

Hieu spent 18 months in the reform school, and we stayed in as close contact as we could. When he was released, he visited us briefly, but then vanished.

We learned later that Hieu had been caught up with some extremely unsavoury characters: a group of adults here in Hanoi who were exploiting street boys. The moment we offered Hieu a way out, he accepted immediately. He’s been with us ever since.

Hieu’s story is not unusual. Lots of the Blue Dragon boys have similar stories.This is why, during May and June, we appealed for donations to expand our crisis work. 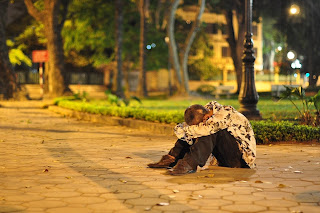 Hieu, and the many children like him who we meet, have a long road ahead to recover. Some never do.

From what I have seen, there are 3 noticeable phases that the kids go through shortly after they come in to live at Blue Dragon.

First, they become younger. Physically, they change. Years drop away from their faces. It’s an extraordinary thing to see. A month or two after Hieu moved in to the Blue Dragon shelter, he looked a couple of years younger than his actual age. And psychologically the kids go through a transformation. These street-wise, hard-living tough guys start to laugh, play with toys, and in so many ways start behaving like children half their age.It’s not unusual to spot them sitting on the floor of our drop-in centre cuddling soft toys.

This can take weeks or months. But it doesn’t last.

Next, the kids start reflecting on what they’ve been through. They wonder about who they are. Being at Blue is great – but why aren’t they with their families? The love and care they receive from our staff becomes a painful contrast with what they should have from their own relatives.

The kids go through a period of self-destruction. They test us meticulously. Will we still care for them if they steal this bicycle? Will we kick them out when we catch them carrying a knife? How will we react when they don’t come home for a few nights? Will we notice the swear words they have carved into their arm with a razor?

Sometimes their behaviour becomes dangerous. Sometimes they start to cut themselves and burn their own skin with cigarettes. They get into destructive relationships and won’t listen to anyone – until it all falls apart.

Just how long this phase lasts, and how bad it gets, depends largely on the children themselves. Blue Dragon’s role through this can be to guide, discipline, and counsel; and as a last resort, we may assign one staff member to simply be the ‘anchor’ who keeps up the relationship with the child while they go wild. At times I have served as the anchor for a couple of kids, but mostly this is a job for our younger local staff who have great relationships with the kids and really know how to ‘get through’ to them.

Being the anchor for a child who is going through this phase can mean meeting up at cafes, or on the street; it can mean staying in touch over Facebook or by phone. It takes a little creativity, a very thick skin, and a truck load of patience.

When kids get to the end of this phase of self-destruction, that’s when their lives have finally turned a corner. The third and (hopefully) final phase is one of stability. But it’s not always a straight-line progression – sometimes kids will lapse back into self destruction for a little while – and it also doesn’t mean the kids grow angel wings. Some do. Some don’t. But that’s not the point. Rather, the goal is that they work out for themselves who they are, and feel comfortable with their identity.

That’s where Hieu is at the moment. He’s just coming out of his phase of self destruction. He’s an incredibly bright kid, with a strong sense of empathy. He’s finding it difficult to accept that he has no loving family outside of Blue Dragon, and I suspect he will always struggle with that. Hieu is a deep thinker.

I wish I could say that the kids have fairy tale endings when they meet Blue Dragon. They don’t. For many, their first meeting with us is only the start of a long and difficult road. But that road to self acceptance and understanding is worth going down, and we are proud of the many fine young people who have walked that road with us.

* Nope, that’s not his real name, and identifying information has been changed.