Six months ago, 13 year old Tiep* thought that life had no hope.

Deceived by a trafficker pretending to have ‘training opportunities’ for disadvantaged youth, Tiep’s parents agreed for him to leave home and learn a new skill, which they hoped would guarantee him a better life.

Blue Dragon found Tiep and took him home in July. It was immediately clear that his family’s extreme poverty was the main reason they were vulnerable to trafficking: their family home was in ruins, and they had no money to repair it, let alone pay for their children’s school fees.

Apart from helping Tiep home and supporting him to return to school, Blue Dragon agreed to rebuild their house. As the family belongs to the Thai ethnicity, we’ve had it built in the local style, and as of today the house is almost completed. In the coming week the floor will be finished and the electricity connected. Tiep and his family are thrilled!

But the best part has been seeing the whole community chip in to get the house built. The village has no money at all to contribute, so instead people have helped with the construction even though it’s also harvesting time for most families. Some local government officials have been involved too, helping with the design and making sure we stick to budget. It’s really been a ‘whole village’ effort. 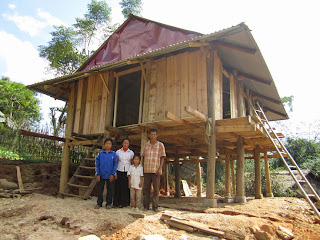 Yesterday we had a small gathering to congratulate the family on their new home. Tiep’s mother was close to tears as she told us that she never thought her children would have a proper roof over their heads.

What a delight to help this family get their lives back together.

* Not his real name

← It's all about people The best and the worst →
×
View by:
We use cookies to ensure you enjoy the best browsing experience on our website.
By continuing to browse our site you are agreeing to our use of cookies. Please read our Cookie Policy.