The Tet (Lunar New Year) holiday already seems like ancient history, even though it ended just a couple of weeks ago. But the Year of the Horse is off to a swift start, and I can see that this will be a big year for Blue Dragon.

– The exploitation of street kids in Hanoi stands out as the most pressing problem we face right now. There’s a growing group of adults, both men and women, who seem to think that homeless kids are ‘fair game’: that they are there for exploitation and abuse without consequence. I’ll be writing more about this in coming months, and I am looking forward to proving that there are indeed consequences for exploiting homeless kids. Stay tuned.

– Two trafficking cases have come to us already, and we are still in the investigation stage so I can’t say too much. While it could be disheartening that trafficking is so common, there’s great encouragement in the fact that both regular citizens and government agencies are so active and involved in finding, reporting, and resolving trafficking cases. During the coming year, I hope to post plenty of stories of successful rescues and the arrest of lots of traffickers.

And although these are big issues, the greatest satisfaction as always is in the stories of the kids: the individual girls and boys whose lives we touch and transform every day.

One of the Blue Dragon boys, “H,” has just returned to school after 6 months. He’s been living on the streets, in and out of trouble, on the run from a family that doesn’t know how to care for him. 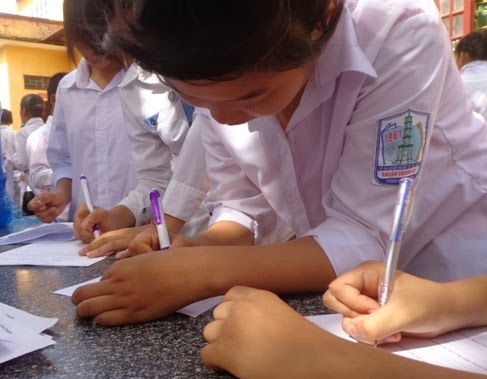 Aged 13, H simply doesn’t know how to manage his own behaviour or make good decisions; he’s been like an explorer without a compass, wandering alone and making his own way.

Shortly before Tet he meet the Blue Dragon Outreach Team who took him in and gave him a place to stay while he works out what he’s going to do. Now that he’s back at school, he has moved into our Shelter to live with other kids just like himself.

Going back to school after surviving on the streets is no easy matter. It’s hard for a teenager who has had freedom to roam at will, make fast money and live for the moment to suddenly start complying with the endless rules and regulations of Vietnamese school.

When H first went to the school to ask to join a class, one of the teachers grabbed a pair of scissors and cut his fringe – right in front of a Blue Dragon Social Worker! The poor little guy was devastated to see his beloved long hair stolen away like that.

It seemed that his hair was simply too long according to school regulations. I was so excited that he was simply prepared to return to school, but the reality was that his commitment to study was not enough. He also needed short hair.

Despite that unnecessarily rocky start, H has had his first day back at school, and was still smiling at the end of it. That’s a huge success.

Will he get through another day? That remains to be seen. I think it’s best to accept the small victories as they come, and H’s first day back at school is something I can definitely celebrate.

← This is how we do it The muddy road →
×
View by:
We use cookies to ensure you enjoy the best browsing experience on our website.
By continuing to browse our site you are agreeing to our use of cookies. Please read our Cookie Policy.