An 18 year old Vietnamese girl had crossed the border from China, handed over by Chinese authorities who found her bleeding and screaming for help on the streets. The girl, “Thuy,” was frantic and in great pain, but her story was not immediately clear. By now we’ve been able to piece most of it together.

In October 2011, Thuy was lured from her home by a friend offering her a well paying job in China. Aged 16, Thuy believed she had been offered a great opportunity. She would sell clothes in a shop not far from the border, earn a great income, and easily be able to visit her home in northern Vietnam from time to time.

But once across the border, there was no clothes shop. Instead, Thuy was taken inland and sold to a brothel. We don’t yet know much about where she was, or exactly what happened; but Thuy was now a sex slave, unable to escape or call for help.

A few nights ago, however, Thuy took a chance. It was 4am, and she believed she could make a run for it. She took to the streets, running blindly, but within minutes was tackled by 3 of the Chinese brothel keepers. They attacked her with knives and then, as far as we can tell, stuffed some kind of drug into her wounds, and left her. Presumably they thought she would soon be dead.

Some locals witnessed this and called the police, who promptly got her to a hospital.

Yesterday Thuy was handed over to the Vietnamese police. She is in a very fragile state now, and we’re just starting to put the pieces together to work out where he family is. It seems her mother has long been gone, so we are trying to find her father. 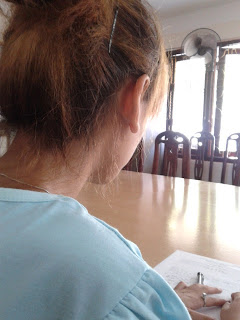 Safe in the border area, Thuy awaits reunion with her family

Thuy is much calmer now, and staying in the care of Blue Dragon. In coming days we’ll assist her to make a statement to the police, go out to her home town to locate her family, and take her to hospital to treat her wounds. We can do all that pretty easily. But the hard part will be what cannot be seen: dealing with the extraordinary psychological trauma that this teenager is now facing.

← The life of Phi Quang Huy Street kids have family, too →
×
View by:
We use cookies to ensure you enjoy the best browsing experience on our website.
By continuing to browse our site you are agreeing to our use of cookies. Please read our Cookie Policy.