Street kids have family, too

On Sunday morning, almost 100 adults – aged from the mid 20s through to the early 80s – gathered on the rooftop of Dragon House. 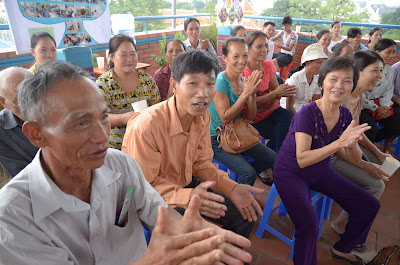 These are the parents, grandparents, uncles, aunties, and foster parents of Blue Dragon kids in Hanoi. It’s often forgotten, and sometimes overlooked, but street kids have families too.

When Blue Dragon was starting out, back in early 2003, our biggest mistake was in failing to connect with the families. We met kids on the streets, and we worked directly with them. We certainly had some success, but there was always something missing, and it took us some time to work out what that was.

Our first lesson was that we could be far more effective if we had the support of the children’s families. And so we began including them in discussions and decisions, which was often hard to do because they tended to live outside of the city while their children had migrated in to Hanoi. Our volunteers and staff spent a lot of time taking public buses out to rural villages.

And then came our second lesson. We were more effective still if we supported the children’s parents – and not the other way around. To answer the question “How can we help this child?” we had to respond with another question altogether: “What does this child’s family need?”

Of course, it’s rarely so simple. We currently work with hundreds of children in Hanoi, and yet only 100 family members joined in today’s meeting. Not all families want to be involved. Some are very open about not wanting their children. Occasionally we meet families who ask the police to take their kids to reform school – a kind of 2-year detention camp – just to take them off their hands.

Even in those cases, though, family is important. With care and effort, we are often able to reunite children with their families, and encourage parents to understand their children’s needs. For those kids who simply cannot be reunited with their family, we have long term shelters where they can live while they study or find jobs. In a very real way, Blue Dragon becomes their family. 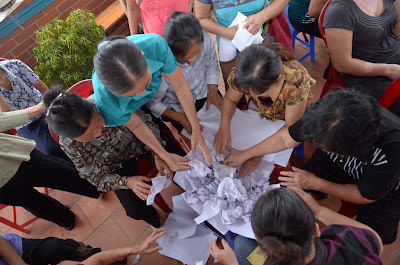 Family members enjoying a game – grown ups can have fun, too!

Families are important, but for some Blue Dragon kids families represent an unattainable dream. We’ll continue working closely with family members whenever we can, and we’ll be there for those who just don’t have a loving family to care for them.