This weekend, two of the Blue Dragon boys are setting off on new and great journeys.

Duy Nam first joined Blue Dragon in our early days: August 2003. Nam was shining shoes near a television station when I met him, and he was so eager to climb out of poverty that he immediately joined Blue Dragon’s football team. Despite living on the other side of the city, he would travel by bus every Sunday morning to arrive at the field by 8am and play before heading back to work.

Nam needed surgery, so we helped him with that and he returned with his mother to his family home to recover. It was almost a year later that Nam moved back to Hanoi to live in The Big Room, which was Blue Dragon’s first home for street kids. He distinguished himself as the most hard working of all the kids we met, and also the wisest: the other children nick named him Tam Mao, after a wise character in Chinese mythology.

After some study, Nam went to work for Hanoi restauranter Donald Berger; and almost 10 years later, Nam is still working for Donald in the role of sous chef. He’s 3rd in charge of one of Hanoi’s finest restaurant kitchens, has won awards in Iron Chef, and this Sunday, Nam will marry. 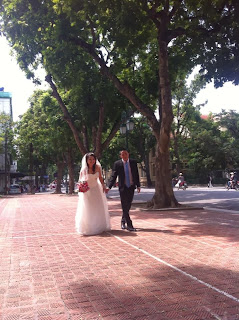 This is a big wedding for Blue Dragon. Nam has such a long and strong history with us, and he’s one of our best respected young people. I think the Blue Dragon team will be taking up a lot of space at the wedding party…

(And a note for non-Vietnamese… One of the traditions here is to take wedding photos before wedding day – hence the photo above!)

But meantime, we are saying farewell to another of the Blue Dragon boys who is heading oversees. We first met Can in 2006 in Saigon, where he was working on the streets as a flower seller. He’s been with us since, although for 4 years he studied at Chatsworth International School in Singapore on an extremely generous scholarship.

Armed with an international education, Can has now been offered a full scholarship to study in Auckland, New Zealand, at NTEC. He will be studying a Business Management degree for at least 2 years, which means being away from home for a very long time.

Can flies tonight (Friday), so we’re all taking time to say goodbye and wish him well. Tonight we’ll head out to the airport to see him off, and a whole entourage of his friends will be there. He’s very much loved. 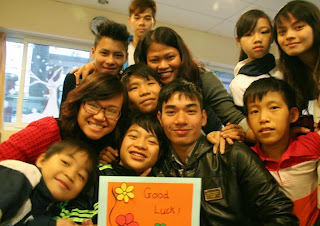 Can’s farewell party! (That’s Can with the badge on his jacket)

I remember those early days of Blue Dragon, 10 long years ago, when we wondered if we really could help Vietnam’s street kids to change their lives. Nam and Can seem to be an answer to that question. They are remarkable young people who just needed a helping hand to get out of crisis – and now they’re flying!

← The best and the worst Make me legal →
×
View by:
We use cookies to ensure you enjoy the best browsing experience on our website.
By continuing to browse our site you are agreeing to our use of cookies. Please read our Cookie Policy.