Khanh* was a 13 year old orphan when we first met him on the streets.

Both of his parents had died several years before, and he had been raised by uncles and aunties who were basically good people but didn’t want to be burdened with somebody else’s child. They made their feelings obvious, so one day Khanh grabbed all he could stuff into his pockets and left town.

Once in Hanoi, Khanh met up with other homeless youth and drifted about. Street kids tend to be pretty creative when it comes to surviving; Khanh was no different. He lived on bridges, found abandoned shacks to stay in, and moved from place to place. He doesn’t like fighting and isn’t an aggressive person, so he would often move on to a new location rather than stand his ground when rival gangs turned up or somebody came to cause trouble. Every day started with Khanh wondering where he might sleep the next night. 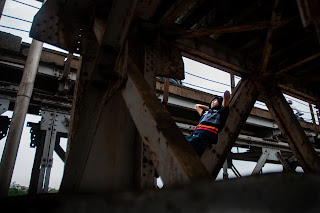 Hanoi’s street kids often live on bridges
or in concealed spots, away from the public.

Blue Dragon’s Outreach team met up with Khanh and brought him to the drop-in centre, but he was reluctant to stay with us for very long. Khanh feared that we would force him to go home, or treat him like he had been treated for the past few years. For now, all he wanted was freedom.

His freedom came at a cost. In order to eat, Khanh needed money, and so he soon found clever ways to get by. He’s an ethical young person, and didn’t want to rob people or break into homes, so he instead carved out a niche in metal recycling. Unfortunately, his metal was all part of a park fence that he set about dismantling… and when the police found him taking apart public property, he was arrested and sent to reform school.

During his 18 months there, we visited when we could and brought warm clothes for the winter. Khanh worked hard and studied well, and so was released early – but was back on the streets in no time. He connected with Blue Dragon straight away, but at the same time was being targeted by adult gangs who saw a good looking kid and just wanted to exploit him.

After a couple of months, Khanh was ready to leave all this behind. We saw him one day in April on a bridge over the Red River, invited him to come and live with us, and he’s been with Blue Dragon ever since.

Khanh’s transformation into a studious, hard working 8th grader has been amazing to see. He’s no angel, but he’s honest and caring, and intensely loyal to both friends and Blue Dragon staff. 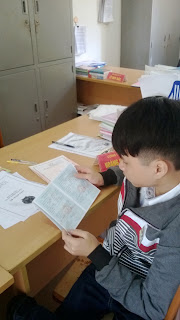 Khanh’s story is a good case study in how Blue Dragon’s multidisciplinary team works together. Outreach workers, Social workers, Lawyers, Teachers and Shelter staff have all played a part in Khanh’s decision to leave the streets, live in a home, and return to school.

Just a few weeks ago, one of the Blue Dragon legal team accompanied Khanh back to his village to meet the local government and obtain the all-important personal papers that he needs to continue at school. In coming years, those papers mean Khanh will be able to get a proper job, a motorbike license, and one day get married or rent a home of his own.

One way to look at what we’ve done with Khanh is this: We’ve worked to make him legal. He’s no longer homeless, no longer stealing to survive, no longer living without official identification and paperwork.

Blue Dragon meets many young people like Khanh – sometimes 5 or more in a week. That’s why, this Christmas, one of the wishes on our list is for donations to obtain legal identities for children (more info about that is here).

It’s an unusual request for a Christmas gift, but street kids don’t have time for luxuries. First they need the basics.

Now that Khanh has settled down and is doing well, he’s starting to imagine a future. Nobody who meets Khanh can guess at the troubled start he’s had in life – he’s just an ordinary teenage boy who likes computer games, girls, and hanging out at Dragon House.

But he has the basics now; he’s safe and happy; and the future is his own to create.

* Not his real name.

← Farewells and wedding bells The Year of the Crisis →
×
View by:
We use cookies to ensure you enjoy the best browsing experience on our website.
By continuing to browse our site you are agreeing to our use of cookies. Please read our Cookie Policy.