The Year of the Crisis

And that’s putting it nicely. Looking back, I will have to call this one the Year of the Crisis.

It’s often been difficult to share the stories of what has happened at Blue Dragon during the past 12 months. There have been many times I have wanted to write about an issue or a special case, but have had to hold back. Most of the cases have involved child sexual abuse, and so have involved police investigations. All up, we have worked with more than 30 individual cases of children being sexually exploited, both girls and boys, and I have no simple explanation for why the number of cases has been so much higher than previous years.

When Blue Dragon meets a child who has been the victim of exploitation, we take on many roles:

– we offer emergency accommodation and care;

– we organise a health check at a clinic;

– we provide counselling, which is sometimes formal and sometimes simply involves ‘hanging out’ and building a trusting relationship;

– we assist the child to make a statement to the police, and provide legal advocacy from beginning to end;

– and finally, when the child is ready, we develop long term plans for stable accommodation, schooling, and family reunion, if possible.

We’ve found over the year that most of the ‘exploiters’ target the kids very carefully. They choose victims who are estranged from their family, desperately hungry, and seeking friendship. 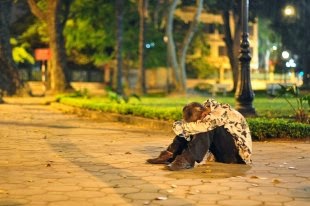 Our response has been to get Blue Dragon staff out onto the streets day and night, meeting kids in places where they commonly gather and developing networks among street workers who can call on us when they meet kids in crisis. This has been hugely effective, and as the year has gone on we’ve been able to get to homeless children and youth early enough to protect them from exploitation. We’ve likely saved at least another 30 kids from being exploited.

This work is in addition to the rescues we’ve done of young people trafficked to China for sale to brothels, and children trafficked to sweat shops in southern Vietnam. Those cases have involved painstaking investigation and legwork, often out in the remote rural areas which are considered ‘safe targets’ by the traffickers.

While the rescue trips have so far all been successful, every case is played out with bated breath. What dangers lay in store? Will the traffickers know we are coming? Do we have the right information? What if we travel from one end of the country to another and find nothing? While we rarely say much about the details of the rescues – we need to be reasonably discrete to make sure we’re safe – there have certainly been some trips this year that had very tense moments.

Our older kids have had tough years, too. As they grow up and move on, we normally stay in contact and catch up when we can. That often involves helping out when problems arise: when someone is arrested, or injured in an accident, or passes away. This year two of our older kids died of illness: 19 year old Yen, and 25 year old Huy. Other kids have spent time in hospital, lost family members, or been arrested for various offenses. One of the teens we were working with on the streets has been charged with murder; there’s very little we can do for him now.

There’s a lot about 2013 that I am glad to put behind me. But I’ve also seen some true beauty in the Blue Dragon kids, staff, volunteers and supporters.

– After speaking at a school in Singapore about the life of Vietnamese street children, two little girls approached me with all the loose change they had in their pockets. Moments like that are deeply moving; they remind me that there really is good in the world, even if it’s sometimes hard to find.

– Earlier in the year, we had a group of teenage girls who had escaped from sexual abuse and needed to stay with Blue Dragon for several days while we helped them make statements to the police. I emailed all my staff asking if anyone could volunteer to work some night shifts to look after the girls, and was inundated with offers of help. I really do work with an amazing team.

– One of the Blue Dragon boys, who has been through an extremely difficult time these past 2 years, asked my staff why I stay in Vietnam for Christmas and don’t return to Australia. The staff suggested that maybe I can’t afford the ticket back, so I prefer to stay here, at which the boy said he wanted to save his breakfast money to buy me a plane tickets. Rest assured, I won’t be taking him up on that offer, but what a show of compassion from a child who has so little.

So it’s been a tough year, but with lots of bright spots throughout. Thank you to everyone who has cared, emailed, donated, visited, or followed the adventures of Blue Dragon in 2013. You can’t imagine what your encouragement has meant to me and my team. And very special thanks to friends in Australia, Singapore and the US who hosted and met with me in my travels.

Here’s to better days ahead. There are surely plenty to come.

← Make me legal What did Blue Dragon do in 2013? →
×
View by:
We use cookies to ensure you enjoy the best browsing experience on our website.
By continuing to browse our site you are agreeing to our use of cookies. Please read our Cookie Policy.